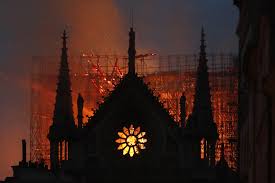 When an event of global significance occurs, there can be pressure to conform to a particular emotional response. How do we react when art touches us all?

Occasionally, such an event can illicit genuine reactions and spontaneous displays of emotion. And so it was with the responses to this week’s fire at Notre Dame, in Paris.

This has had an impact on me personally, as I am about to take my wife on a long-awaited trip to the city. Though it feels a little selfish to say so, Notre Dame was high on our list of must-see destinations. For me, this would be a re-visiting of something that had moved me deeply on a previous visit, some 35 years ago.

Back then, I was on an outing, together with an irreverent bunch of colleagues, all in our late teens or early twenties. The trip included the usual sight-seeing but was mostly just a bit of a jolly. Our general demeanor had not been one of polite sensitivity or cultural inquisitiveness. Rather, we were more like a bunch of school children that had been let loose without proper supervision.

Until, that is, we visited Notre Dame cathedral. It’s too long ago now to recall what day of the week it was but, if memory serves, there was some kind of service taking place within the rear part of the building. This included a choir and possibly the organ as well. The effect, combined with the many candles burning around the building and the sunlight slanting through the enormous stained-glass windows, was truly awe-inspiring.

The usual ribaldry and frivolity had left us, as we emerged – one after the other – into the bright morning sunshine. Maybe because of our lack of expectation, the majesty, the atmosphere and perhaps the spirit of countless pilgrims had overwhelmed us. We were speechless and somewhat humbled by the intensity of what was simultaneously a collective yet very personal experience for each of us.

So, it was not surprising to witness the heartfelt prayers and impromptu singing of hymns as Notre Dame stood in flames this week. Nor the painstaking care taken by the fire crews. Or the personal risk to which they subjected themselves in rescuing irreplaceable works of art.

Even as a nation grapples with its internal politics and the world confronts a future full of uncertainty, art has the ability to unite, inspire and overcome. Just when it may – to some – appear an irrelevance, a waste of both time and resources, creativity shows its true worth. Some of the motives and methods behind the creation of such an enormous structure may seem questionable. But, to those that have provided the artistry and craftsmanship – as well those that have invested it with faith and wonder– the results transcend such mundane considerations.

No doubt, we will still visit the cathedral, as planned, next week. And that visit will now take on a whole new significance. As will the cathedral itself. Already, there is talk of rebuilding and restoring. Some may use this as an opportunity for self-aggrandisement. But, for the majority, this will be a labour of love, hope and unity.

Home » Blog » When Art Touches Us All