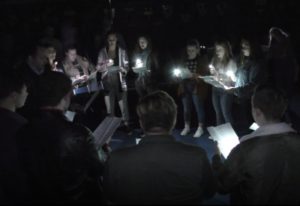 Sometimes you just need to let go of the reins.  Events may then conspire to make things better than you had planned them.

I was recently working on a theatre production that comprised story-telling, songs, a hidden choir and surprise dancers. The choir and dancers were both embedded within the audience. The intended aim was to break down barriers between performer and onlooker. It was hoped that this would create an immersive, participatory experience.

The choir and dancers were kept secret from all concerned, except one another. They were to perform right at the end of the show, beginning from an unexpected black-out. At this point in the performance, the audience was on its feet and moving around the space.

Originally, I had asked the choir members to spread to the four corners in preparation for their singing entrance. The dancers were to make their way out towards the choir members and then move with them to the centre. Both choir and dancers were arranged into four parts and the connection would be slowly revealed as the piece progressed.

However, it emerged that the choir could not stay in time with one another when dispersed around the space. So it was decided they should form a circle at the centre, with their conductor in the middle. This, at first, felt like a compromise. In the event, though, it worked very well.

The choir, placed centrally, used their phone lights to illuminate their scores. This created a pleasing visual effect. It also had the happy coincidence of drawing attention away from the central performer, as he secretly left the space. The dancers now began from the corners and worked their way around the space and in towards the choir.

On the night, the choir were able to stay in time. The dancers were able to easily follow their respective choral parts. And the effect was very moving for the onlooking audience.

Some members of the choir had been a little disheartened in an early rehearsal. They were frustrated at not being able to keep together and deliver a satisfying vocal performance. I was concerned that this may lead to a less than committed effort. However, by working together to find a solution, we reached an outcome that left the choir – and audience – buzzing.

Sometimes, you just have to let go the reins a little. Then you can be open to outside input. And, in this way, a practical problem can be turned into a creative solution.