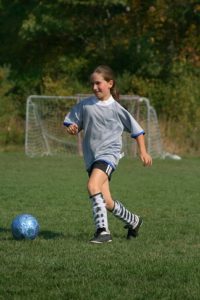 Sometimes, inspiration can come from an unexpected source. So, we need to keep an open mind and avoid pre-judging those around us. You never know where your next source of unexpected inspiration may be lurking. Possibly right under your nose…

Over the Christmas break, I met – as is the tradition – with members of my extended family. One of whom, is a cheeky young thing who works as a sports coach in schools. He also runs a local girls’ football team. We’ll call him Dan.

On the surface, this young chap seems like a ‘blokey’ bloke. By his own admit ion, he was never academically gifted. And his language is peppered with youthful jargon. So, when Dan chose a career in sports, nobody was too surprised. But any assumptions that this reflects a lack of sensitivity or emotional maturity on his part are seriously misguided.

Over the course of our conversation, my admiration for this young man – which was already considerable – grew. He displays a remarkable degree of creative thinking and a real depth of psychological understanding. It’s quite possible that Dan is, himself, unaware of these talents. Nonetheless, he applies them to great effect.

When Dan began coaching girls at his local football club, take-up was low and expectations even lower. He realised, however, that the important thing was the girls felt this was their club. Moreover, he identified the fact that the parents also needed to be invested in their daughters’ efforts.

Previously, parents had dutifully ferried their children to and from games and training. They would gather on the touchline and have a chat, whilst their little one got on with whatever it was they were doing. So, without meaning to, they were giving the signal that they were either not interested or did not believe in what their youngsters were achieving.

Dan set about involving parents in subtle ways. They would run the touchline, provide refreshments and organise end-of-season festivities. Over time, it became as much their club as their offspring. Correspondingly, the children felt this was now something about which their parents cared and in which they took an interest.

One girl’s mother was diagnosed with cancer. Dan knew he would not be qualified to provide any counselling. He also understood the importance of respecting boundaries. So, he sought a way in which he could raise this girl’s spirits and also relieve any awkwardness among her teammates.

He struck on the idea of telling jokes to the girls on the journeys to and from their various matches and tournaments. The internet, of course, is an endless source of material. With a little judicious searching, it was possible to find age-appropriate (and sometimes awful) puns, jokes and riddles to while away the miles.

So, Dan was able to find a way of diverting a troubled young girl’s attention away from her worries, without singling her out. This helped create an environment of togetherness for all the girls. And it has become embedded within the club’s culture, long after the girl in question’s mother has made a full recovery.

The team has grown in numbers and strength. Various age-groups are now catered for. And additional coaches have been engaged to help with the club’s growing popularity. All of which has been achieved through an understanding of the team as individuals. They are young people with needs and concerns. And each wants to feel the support and respect of their friends and family.

Perhaps it is no coincidence that Dan’s day job is in sports in primary education. He clearly understands the importance of ownership for his young charges. He can teach all he likes but it only becomes meaningful to the youngsters if they feel that the achievement is theirs. Similarly, he recognises the value of inclusion. All are welcome and each is valued.

So, any assumptions I may have made about this beer-drinking, football-loving young geezer were wrong. Dan gives each of his young charges the opportunity to show their worth. And he understands the importance of including those around them. The youngsters, therefore, feel supported and their families share both the responsibilities and rewards.

Whilst these principals may be familiar to all educators and facilitators, we can do well to afford the same courtesy to those about us. We may inadvertently make assumptions about our peers that we would not about our pupils and children. You never know what talents may lie hidden within your colleagues – or, indeed, family members. Nor can we always guess where the next inspirational leader may be lurking!