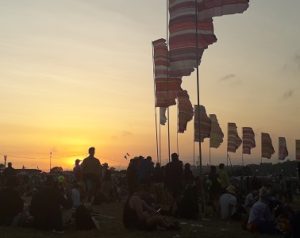 I had the great privilege of taking part in a festival for the performing arts last weekend in Somerset. You may have heard of it, it’s called Glastonbury Festival. Whilst there, a few things struck me, beyond the usual overwhelming sense of being awe-inspired.

Dance on The Main Stage

One was that several main-stage acts incorporated dance within their shows. And not just the usual seductive, eye-candy gyrations to which we have become accustomed. This time, there was a ballet duet (Stromzy); ‘Ballet-Boyz’ (Years and Years) and Christine and the Queens’ unique choreography. The latter was very much  an integral part of the performance. and it was especially interesting to see ensemble dance in which each individual was able to explore their own characteristics.

A second aspect was that many acts drew attention to contemporary issues. Stormzy talked of the need for representation of all sections of society. Years and Years’ frontman spoke about gender issues, calling for acceptance and inclusivity. And Christine (or ‘Chris’ as they are also known) revealed how they often felt like an outsider and a ‘loser’.

Christine/Chris went on to say how they coped with that situation through theatre. They created their own world, one in which they could choose the role they want to portray. Standing on the Other Stage, as the final headline act on Sunday evening, Christine said they felt as though they had finally won something.

What powerful role models these young performers are. Not only has each been able to transcend their individual circumstances, they have also created power from a position in which they originally felt marginalised. To then implore a huge live crowd – and even larger digital audience – to follow their lead is both brave and inspirational.

They stand as living examples to others who may feel similarly on the fringes of society. Whether through music, dance, theatre or other art forms, all can outgrow the limited perception of those around them. It is no accident that Glastonbury Festival has a reputation as more than just another music event. Beyond those main stages, people of all persuasions express themselves through myriad creative means.

That creativity seeps into the consciousness and being of all who attend. Even if, for many, this transformation only lasts for one weekend in the year, it is something to be cherished. And if we can somehow manage to recreate those feelings of openness and love in our day-to-day lives, then this is truly a force for the good.

You don’t have to be a superstar to know the benefits of creative freedom. None of those headline acts started out with the sole intention of finding fame. Each had a story to tell, a past to shed, a preconception to outgrow. And so, I would suggest,  do we all.

Maybe we should think of our whole lives as one big festival for the performing arts. Every day can’t be Glastonbury but we can at least try to bring some of that spirit into the everyday.